Author Peter Wohlleben's new best-selling book reveals the secret lives of trees to all of us. 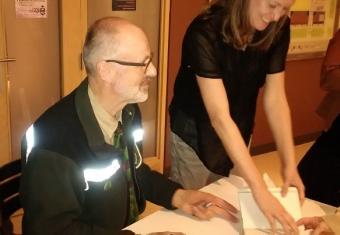 The Hidden Life Of Trees is a fabulous book that has jumped into the top 10 in non-fiction book lists all over the world.

German forester Peter Wohlleben has been watching, listening to, and working with forest trees all of his life. He has developed a keen understanding of these magnificent living wonders, and has found them not only fascinating as a group, but each separate tree has revealed it self to have a unique, and individual way of interacting with it's environment. Peter understands that resorting to anthropomorphism when talking about trees risks his scientific credibility - but as he shows in his book, science is on his side on this one. Trees are true individuals,each with their own goals, traits, and yes - character and personality.

Last evening, I was fortunate to attend a presentation and book signing by Peter at Innis Town Hall on the University of Toronto campus. The event was sponsored by LEAF, and was a complete sell-out.

Peter signing my copy of his book

Peter drew on many scientific resources and the latest research work to underpin his findings. Among the many researchers who contributed technical support to Peter's book, UBC's professor Suzanne Simard weighed-in with her incredible research findings. Dr. Simard's work confirms how trees in a natural, undisturbed environment rely on beneficial mycorrhizal fungi for water, nutrients, disease protection, and much more. Trees also feed and use the vast mycelial networks at their feet to communicate with other trees.

Peter and Dr. Simard have also collaborated on an amazing documentary film 'Intelligent Trees'. The film reveals how science leaves no doubt as to how thoroughly trees in natural environments make incredible use of an internet-like fungal network - this network is often called 'The Wood Wide Web'.

I noted (with great interest) that Peter tells a story in his book about a particular mycorrhizal fungi: Laccaria bicolor (the Bicolor Deceiver). This very versatile fungus helps hardwood and coniferous trees in many ways - but Peter reveals that The Bicolor Deceiver has a very special trick all it's own. When soil nutrients get too low to support their tree partners, the Deceiver will pump a specific toxin into the soil - this toxin kills-off all of the Springtails in the soil body. (Springtails are a tiny insect-like animal that proliferates in healthy soils). The death of these creatures instantly releases the Organic Nitrogen trapped in their bodies - and the Laccaria then transports the Nitrogen to the roots and feeds the plant community.

Laccaria bicolor 'The Bicolor Deceiver' is included in our Transplanter MS-CS formulation (along with 8 other Ectomycorrhizal fungi).