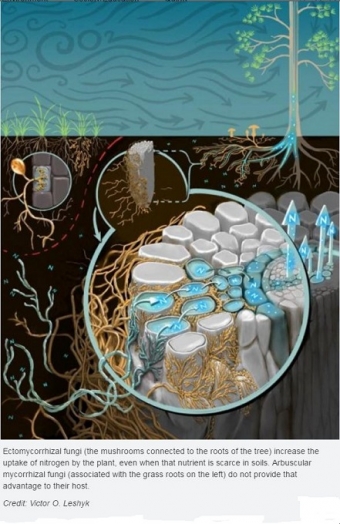 We all know that Green Plants 'breathe in' Carbon Dioxide and convert it to the oxygen during photosynthesis. So one might think that rising CO² levels would mean that the plants around us are all growing faster these days. 'Not quite' a new study in the journal Science explains.

It turns out that plants can only take advantage of a rising CO² supply if they have:

But, adding increased levels of Soluble Nitrogen to soils is problematic for (at least) 3 reasons:

On the other hand, mycorrhizal symbiosis gives host plants a permanent community of fungal helpers that can symbiotically supply them with a wide array of nutrients latent in soils. Just one more reason why we need to get plants hooked up to their mycorrhizal partners whenever and wherever we can.

There are thousands of species of mycorrhizal fungi working symbiotically with the roots of plants in undisturbed natural environments. The majority of mycorrhizae (95%) fall into 2 classes or types: Endomycorrhizae, or Ectomycorrhizae. Each plant species works with either one type or the other (in rare and interesting cases, some plants work with both types). The table (and downloadable PDF) at the bottom of this page shows which type of mycorrhizae plants work with. Both Endo's and Ecto's establish a beneficial symbiosis with roots, the difference between them is exactly how they connect to the plant host's root.

Here's how the 2 major types of mycorrhizal fungi hook-up to roots:

The study published in the journal Science was led by César Terrer Moreno, a Ph.D. student at Imperial College London. Among it's many findings, the study also confirmed that Mycorrhizal fungi are a major carbon sink needed (more than ever) in the fight against climate change. The vast networks of Mycorrhizal fungal filaments (Hyphae) associated with healthy plant roots sequester tons of atmospheric CO² in the soil. Here's a great synopsis of the study's findings: http://scienmag.com/microbes-nitrogen-and-plant-responses-to-rising-atmospheric-carbon-dioxide/

A quote from one of the Study's authors:

"Nitrogen and mycorrhizae are like the X-factors in plant responses to CO²," said Bruce Hungate, Director of NAU's Center for Ecosystem Science and Society and Regents' Professor of Biological Sciences, who was a co-author on the study. "Rising CO² is not a universal fertilizer, but neither is nitrogen limitation a universal restriction on the CO² response. The truth is in the middle, and microbes are the key mediators," Hungate said.